My adventures in integrating my Church and Conservatorium music background with my Australian Indigenous music heritage are continuing in 2018. This year I’ve been working with the Darug Aboriginal community, who are reviving their threatened Dharug language by teaching indigenous and non-indigenous people to sing contemporary songs with Dharug language words researched and revived by Dr. Jeremy Steele, Dr. Jaklyn Troy, and Darug Elders Auntie Edna Watson, Jacinta Tobin, Richard Green and Julie Bakhari Webb (among others). This revived Darug indigenous music comes from the bountiful land we live on, that gives us life and breath and food from our Creator. 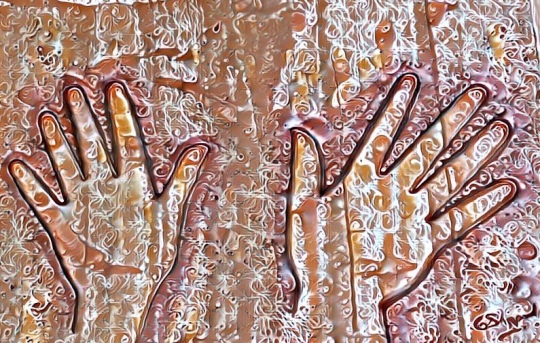 In 2018 I continued my internship with Dr. Christopher Sainsbury’s Australian Indigenous Composers Initiative, sponsored by Mooghalin Arts. We began in March 2018, and progressed through performances of works for Ensemble Offspring by Brenda Gifford, Troy Russell, Rhyan Clapham, Timothy John Edward Gray and myself (Elizabeth Sheppard) at the Biaime’s Nghunnu Festival at Brewarrina, on Murawari country. Nghunnu is the word for the Murawari fish traps on the Barwon River, and Biaime is the Creator. Undeterred by surgery on my left knee, I became a Bionic Woman, and soldiered on with composing a series of new works while completing demanding rehabilitation exercise routines. After attending face to face and Skype Composition tutorials with Dr. Kim Cunio, Music Lecturer at the Australian National University, I and the other four ICI Composers were ready to Workshop our brand new music with the Ensemble. One of my new pieces, inspired by a the legend that Darug Aboriginal Women used to sing to baby eels as they swam upriver, was undertaken with the permission of Darug Aboriginal Elders from Parramatta. 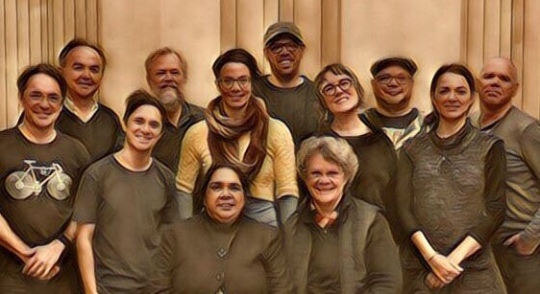 On May 10 2018 Dr Christopher Sainsbury, the ICI Director, Australian National University Music Lecturer, and an eminent Darug Aboriginal composer, welcomed us, gave the Aboriginal Country Acknowledgement, and welcomed Yorta Yorta Aboriginal composer and opera singer Deborah Cheetham. I’d met Deborah previously at a Madjitil Moorna Choir rehearsal on my mother’s Whadjuk Noongar country (Perth). Deborah talked with us about using Aboriginal languages in our compositions, shared how she composed and performed an a capella song in Gadigal Aboriginal language with Eora College students, and encouraged us to share our music and collaborate in community and with each other, as this is an important principle of Aboriginal music.

After we welcomed the Ensemble performers – Jason Noble (Clarinet), Sonya Holowell (Dharawal Mezzo Soprano), Anna McMichael (Violin) and Roland Peelman (Composer, Canberra International Music Festival Producer and Director, and Pianist). They tuned up, and we began the Workshop. First off the rank was my piece, Burradowi. The Ensemble played it right through several times with all instruments, with Roland Peelman delighting us with his comments and improvisations. The piece was treated to a real workout, with every possible variation being applied to it, including some skilful eel-like sounds from Jason’s Clarinet, beautiful ethereal singing from Sonya, and smooth, soaring violin melodies from Anna. No new ideas were introduced, and no changes to my music score were suggested, but my mentors, indigenous colleagues and the performers provided me, through their performance itself, with valuable musical knowledge that would help me to refine my composition score, and my direction of performances, more effectively.

Four pieces by the other composers were Workshopped, including a beautiful atmospheric piece by Brenda Gifford, called Mirawar (Sky), a meditative lament by Troy, a mysterious cinematic piece from Tim Gray, and Rhyan Clapham’s complex, rhythmically challenging piece in 5/4, that included many tongue twisters for Sonya. Although our pieces are in the early stages of development, each has a particular indigenous character, and each is closely related to the composer’s country.

It was great to be at Eora Aboriginal College again, and wonderful to meet up with Deborah Cheetham, Roland Peelman, Claire Edwardes, Chris Sainsbury, Kim Cunio, Kiriaki Koubaroulis and the other ICI Composers, and also with Dr. John Davis of the Australian Music Centre. On August 8-10 we’ll be hosted at Llewellyn Hall, ANU Canberra, to attend composition lectures, and to present the inaugural Indigenous Composer Initiative group lecture on Indigenous Contemporary Composition, at ANU School of Music. On September 3 2018 we’ll gather at Eora Aboriginal College, 333 Abercrombie St. Chippendale NSW, to Workshop our pieces again, in preparation for two ICI Composer concerts in Canberra and Sydney, and another ICI Composer recording at the Australian National University Studio in November. Thanks to the Ensemble Offspring performers, and to everyone involved in this exciting, ongoing indigenous Australian music Project.